The Comeback: Supporting Mr. Henry during battle with COVID-19

As the death toll across our state increases on a daily basis, we also want to share the stories of survival. 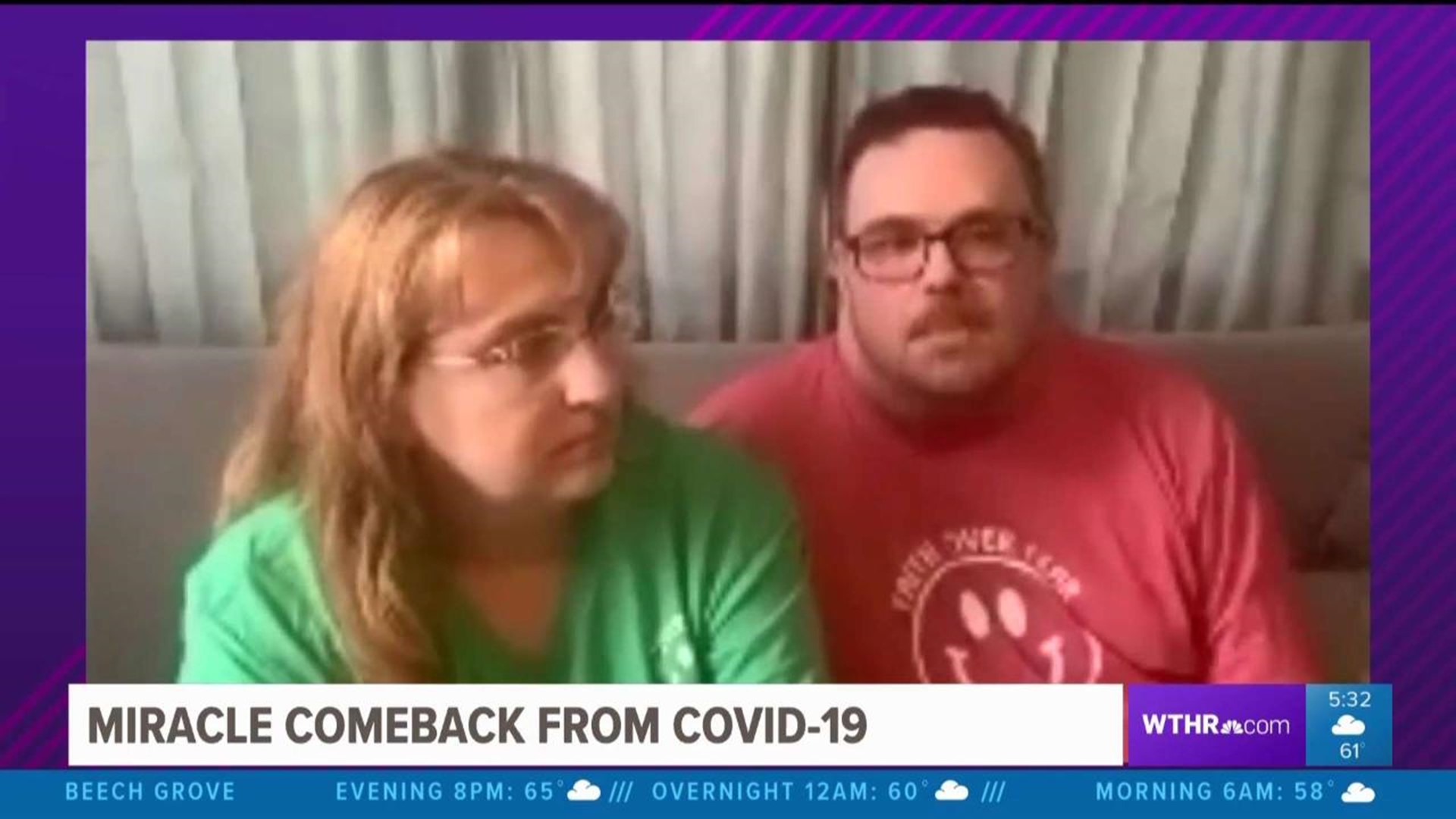 CONVERSE, Ind. (WTHR) — As the death toll across our state increases on a daily basis, we also want to share the stories of survival, to give hope to someone who is battling COVID-19, or has a loved one who is facing this challenging health crisis. 13 News Anchor Andrea Morehead shares a couple's personal testimony of faith, and the prayers of thousands that allowed them to make “The Comeback.”

“I had just gotten over a bout of pneumonia, and so I thought this was just some residual something," said David Henry, 4th grade teacher at Oak Hill United Schools in Converse.

David Henry hugging his wife in the hospital. (David Henry)

He went to the hospital in Marion.

“They really wanted to get him to Lutheran Hospital in Fort Wayne because they had this particular rotating bed that was proven to be successful for some people," said Michele Henry, David's wife.

The transfer was denied because doctors said he would have died during the 45-minute trip.

“I sent out to my friends, please pray that he can get this transfer because that bed is his only hope," Michele said.

Prayers were answered with a slither of improvement on March 30.

“He bottomed out real hard. Like the 31st, the first and second of April, those were really low. They were telling me there’s nothing else we can do, he’s not going to make it," she said.

Their 11 children were told to prepare to say goodbye.

“I said, 'Guys, we really have to prepare ourselves that dad might not make it. And, uh, that doesn’t mean that our faith wasn’t strong enough, it just means that God is going to help us in other ways.' We all just sat and cried for a little bit and held each other," Michele said,

His kidneys shut down, his lungs weren’t working, and his chest x-rays weren’t clear. But family and friends maintained hope over fear and prayed!

“While my body was going through these things there was a part of my spirit that was very present with God, and I remember, clear as day, going through and praying over each of our kids," David said. "I prayed for my wife and I just told the Lord, 'Whatever you want to do with this, it’s a yes. However, however you want us to serve you, it’s a yes. Please don’t take me from my children. Please don’t make my wife raise these children alone.' And I had this wonderful comfort that it would be fine.”

After 28 days on a ventilator, David woke up on Easter Sunday.

“The Lord just wrapped me and comforted me in all those days of isolation. It's one of the most humbling things when I realized that God shared his resurrection day with me,” David said.

It was a family reunion like none other, ending with how it all began — with prayer and love.

David Henry and his family hugging after his release. (David Henry)

“Just seeing our kids at the door, you know they have, they’ve been through the ringer and they hadn’t been able to see him," Michele said. “That moment for me, I’ll never forget the image of my kids’ faces when they saw him come out and wrap around him.”

He received a community celebration they called a miracle parade that also included firefighters.

“It’s been such an encouragement to me," he said. “I came out of this ordeal, realizing again how much I love the woman that God provided for me.”

God answered the prayers of thousands.

"I do grieve for those families that have gone through this condition," he said.

God ordained 'The Comeback' so David can continue loving, teaching, encouraging, and answering God's call to make a positive difference in the lives of others.

“People need to be reminded that in all of this chaos, there’s still a good and loving God whose ways we do not understand, but who is working for our good," he said.

Mr. Henry has experienced a chain of miracles as his kidneys and lungs are fine. His voice is still a little compromised, but he expects complete healing.

If you have a COVID-19-related story of resiliency and inspiration email Andrea: thecomeback@wthr.com.