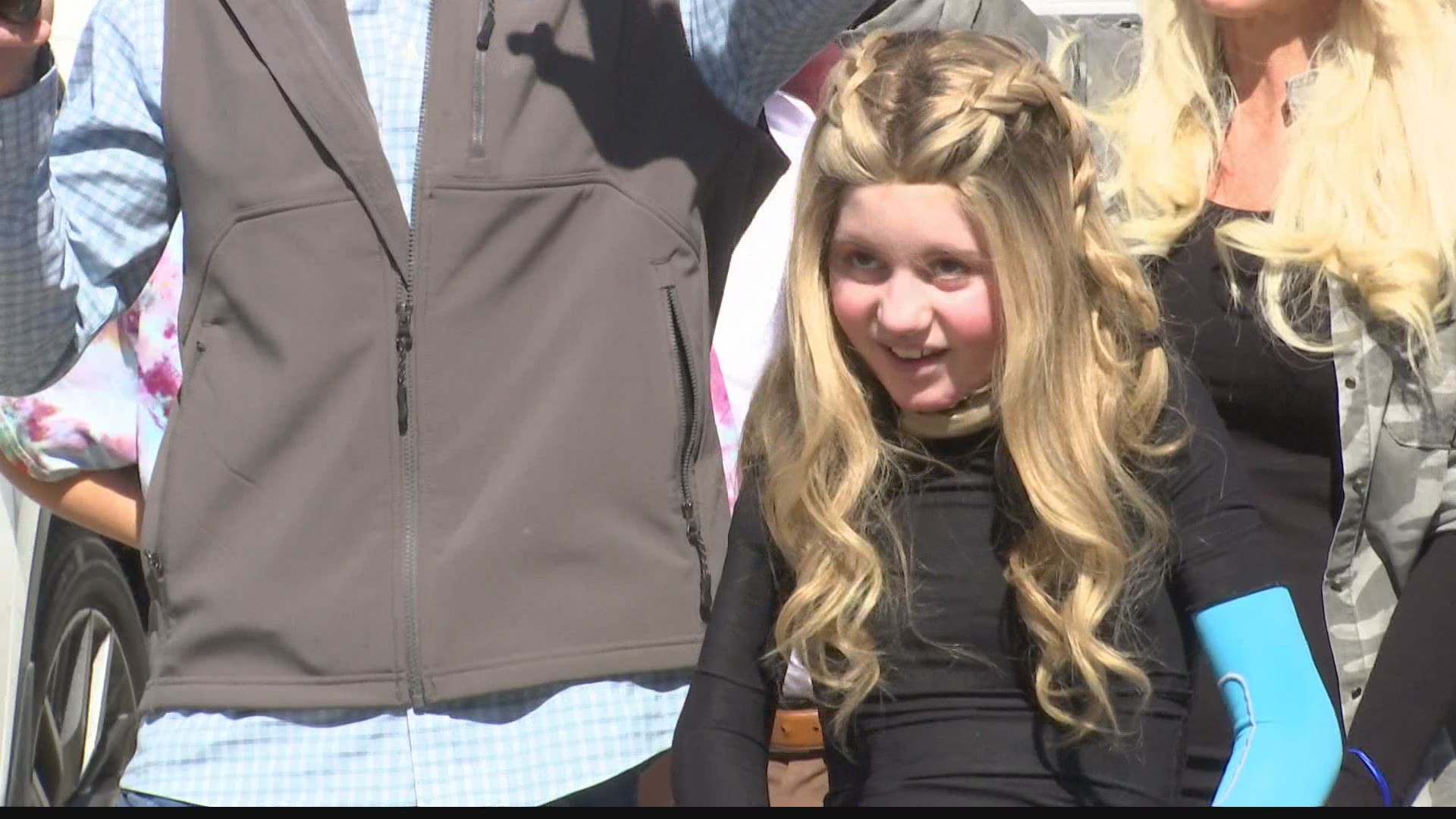 NOBLESVILLE, Ind. — A Carmel Fire Department engine led the parade of more than 50 vehicles Wednesday through a Noblesville neighborhood to escort 12-year-old Natalie Zofkie home from the hospital.

A color guard stood at attention as the family car pulled into the driveway and Zofkie exited the backseat. The sixth-grade girl then stood at the sidewalk as more fire engines, police cars and vehicles driven by other supporters filed past the house.

"Every kid should get that when they survive a burn and they're coming home,” said Zofkie. “I'm just glad that people came. But I don't know if I really deserved all that."

Zofkie left Riley Hospital for Children Wednesday morning after five months recovering from severe burns suffered Oct. 3 in a pit fire accident. Zofkie was at a friend's house in Carmel that night making s'mores. She poured gasoline on the fire to make it bigger.

"His mom told us not to play with the gas can, but we didn't listen,” said Zofkie, who takes responsibility for the accident in which she suffered third-degree burns over 93 percent of her body.

Zofkie spent five months in the hospital, including two months in a coma. In the early stages, many wondered if there would ever be a welcome home for her.

"For like almost a month, everyone thought I was going to die,” said Zofkie. “They're just like waiting there. But I pulled through."

The Carmel Fire Department responded to the emergency on that fall night last October.

"Obviously it was terrible,” said Shane Hedrick, Carmel Fire Department EMT. "One of the worst things you could ever imagine, especially with a little girl. And for her to survive and be here today is a true miracle."

The firefighters who treated Zofkie at the scene welcomed her home, leading the parade that provided the Zofkie an escort for the last few miles to her home. Carmel Fire Department paramedic Arielle Morgan shared a long embrace with Zofkie as family and friends gathered outside the house when the parade concluded.

"This is something I never, ever imagined I would ever see in my career,” said Morgan. “This is probably the most exciting thing I've ever done in my life. And seeing her come home is one of the best things I could have ever imagined."

Zofkie reunited with friends who have prayed for months for her recovery. She's endured about a dozen surgeries and painful rehabilitation for her skin grafts.

"I got out of bed every day and went to my therapy,” said Zofkie. “So if I can do it, then you all can do it, because I am a wimp when it comes to pain."

She was walking in the hospital by December.

“It was a little bit of a tough couple of months,” said Zofkie. “But I'd rather be tortured than be crippled. There's definitely a lot of pain and tears and it was very lonely. But I'm just glad to be out."

Zofkie’s mother, Sarah Zofkie, said her daughter is not expected to require further surgery. Natalie said she will home school for the rest of this semester, then plans to return to class for seventh grade in the fall.