After her uncle tweeted out the picture of her unique "Lion King" birthday cake, 3-year-old Leona of St. Paul has received some serious on-air and online love. 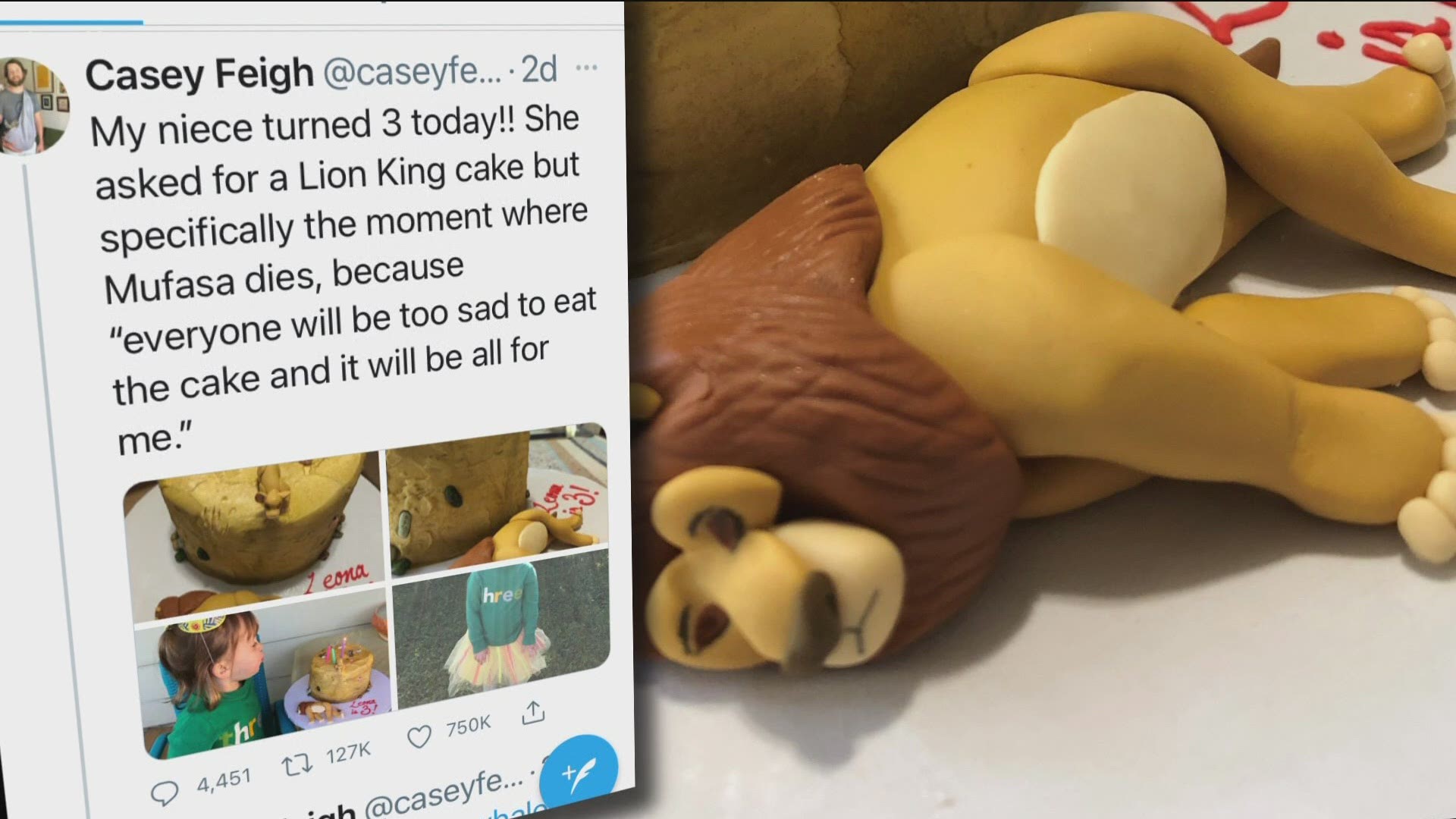 ST PAUL, Minn. — Just when you thought the story couldn’t get any sweeter.

After her uncle tweeted out the picture of her birthday cake showing Mufasa of the Lion King at a rather dire moment, 3-year-old Leona of St. Paul has received some serious on-air and online love. Millions of people around the world have clicked on, liked and shared the story.

My niece turned 3 today!! She asked for a Lion King cake but specifically the moment where Mufasa dies, because “everyone will be too sad to eat the cake and it will be all for me.” pic.twitter.com/UOatqCUSj0

“My child turned three, and it became a bit of a thing,” Alison Feigh, mother of Leona, told KARE 11’s Karla Hult on Tuesday.

But like a good cake, that “thing” comes with multiple layers. Turns out, Alison Feigh – the Director of the Jacob Wetterling Resource Center, part of the Zero Abuse Project – just couldn’t resist the opportunity to combine her roles of mommy and advocate.

“My younger brother called me, maybe an hour and a half after he tweeted and he’s like, ‘This is getting some traction. Sometimes when tweets get traction, people want to promote something. Do you have anything you want to promote?’” Feigh recalled about the question, to which she immediately responded: “Yeah, I’d love to promote, ‘Let’s end child abuse. Let’s get more people on board who want to make sure that kids get to live out their healthy dreams and their quirky dreams.’”

Sure enough, after tweeting a link to her organization, Feigh says they did see an increase in online donations and a giant jump in online traffic.

RELATED: Brooklyn Park teacher surprised with $50,000 to pay off his student loans

As for the toddler behind the sweet tale, Leona isn’t phased by her fame. On a sunny afternoon, she turns from fishing with a stick in her yard to singing the lyrics of her favorite movie.

And as for all those online questions, here are a couple answers: yes, the cake décor was absolutely her idea.

“She’s such a sweet empathetic kid. And she understands about sharing,” Alison said, adding, “That’s why it was extra funny that she came up with this.”

And no, despite her stated intentions, Leona did not eat the whole cake.

“When she got her piece of cake, she licked off the frosting, took one bite, and she was full,” Alison said.

To learn more about the Jacob Wetterling Resource Center and how you can help support their work with families, click here.