We're breaking down some of our favorite new State Fair food items, and giving you a glimpse of which parking lot is closest. 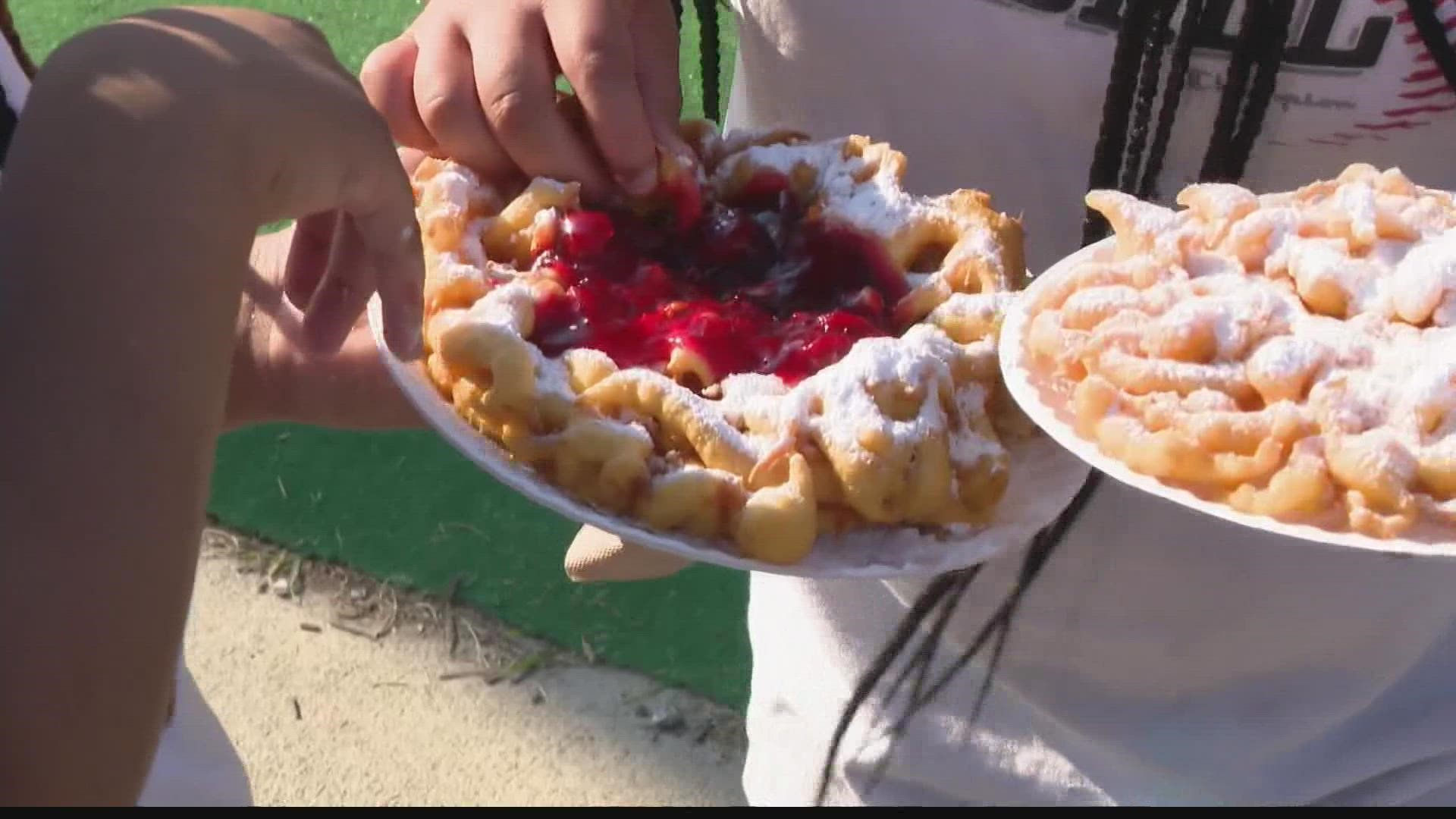 INDIANAPOLIS — It's time for us Hoosiers to start some serious meal prepping.

And, no, we don't mean meal prep in the way of shoving bits of roasted chicken and reheated broccoli into Tupperware. We mean how to figure out the fastest way to get our hands on a Miss Piggy's Mac Daddy Meal.

It's info you'll need to know in order to make room for more fair foods this year, as 23 brand-new foods make their debut.

13News downloaded the Indiana State Fair 2021 app to see where some of your favorites are on the map.

Pro tip: if you open the app and hit "Map," a special 'Taste of the Fair' filter lets you isolate all the special offerings so you can see where they are more easily.

If you come in through Gate 1 and walk past the Hoosier Lottery Expo, the Fruity Pebbles Funnel Cake can be found to the left in front of the Indiana State Board of Animal Health Building, according to the app.

It's a fun twist on a classic, that's crafted with kids in mind - but no judgment if the adults want to try!

This is a classic German dessert made of eggs, milk, and gelatin for good measure, and served up by chefs at The German Corner. It's a German food operation based out of Vevay, Indiana.

You can find them near Celebration Park.

Credit: Madison Stacey
Bavarian Creme Puffs and other German goods are available at the The German Corner.

Even if you don't win Grand Champion at the fair, crispy chicken atop creamy mac and cheese with coleslaw is perhaps enough to make it feel like you did.

Longtime state fair vendor Ulrick Concessions is responsible for this new State Fair food, and are the same folks who collaborated with Sun King to make the Funnel Cake IPA.

Find this in front of the Administration Building.

And note the above photo is just a sample size, the real thing will be much larger!

This is mac and cheese topped with barbecue pulled pork. No need to explain further.

Find it near the Indiana State Fair Free stage, in between the Sati Babi and Pickle Barrel Sirloin Tips stands.

This is a mango puree with a sprinkle of Tajín® Clásico Seasoning. It's a classical Mexican combination that will hopefully help you beat the heat!

Find it at Baskin-Robbins.

Credit: WTHR Staff
The Mangonada will be available at Baskin-Robbins.

Buttermilk Wafflewhich & Cherry Chocolate Funk - next to the Administration Building

Buttermilk Wafflewhich and Cherry Chocolate Funk are both available at the American Dairy Association Indiana Inc., next to the administration building.

The Buttermilk Wafflewhich is a grilled cheese sandwich with a waffle that has cheddar and American cheese on the inside.

The Cherry Chocolate Funk is an ice cream made of Bordeaux cherries, fudge, and chocolate chunks. Yum!

If you have a bit of a sweet tooth, these foods are for you. The BBQ Suga Momma is pulled barbecue turkey sandwiched in between a glazed Long's donut.

Cinni-Minis are the middle of cinnamon rolls deep-fried in funnel cake dough and drizzled with powdered sugar.

If any of these three sound temping you're in luck - they are right next to each other across from the Indiana State Fair Free Stage. Why not hit up all three?

A big talker this year was the reemergence of the Beef Parfait, a classic beef brisket and mashed potatoes concoction that has not been served at the fair for several years.

This new iteration is different from its gravy-laden forbearer, which chefs swapped out in favor of a special barbecue sauce.

"We didn't try to mimic that one," vendor Fabian Johnson said. "We came up with our own idea where instead of the gravy we use a barbecue sauce.

Don't worry, the layers of beef biscuit and mashed potatoes served up in a plastic bowl the size of a large sundae are still there.

It's only available at the Indiana Beef Cattle Association's north side tent, near Pioneer Village and just near Mac Reynolds Barn.

The State Fair app might show differently, when we checked the beef parfait was shown as being served near the cattle barn. According to State Fair officials, this will only be served at the location near Pioneer Village.

Finally, a spot at the State Fair where vegans can enjoy real fair food! While other stands may offer up sides or single items, the chefs at Black Leaf Vegan will give you a full vegan meal!

Black Leaf Vegan is the first full-vegan food vendor in Indiana State Fair history. So not only is your food cruelty-free, you're a part of history.

They are located near Mac Reynolds Barn.

Get a glimpse of their other foodstuffs on their Instagram page.

It was just a few years ago that you could drink at the Indiana State Fair, and people thought just the one booth selling alcohol was a big deal.

Now, there are five areas where fairgoers can enjoy an adult beverage.

Credit: Madison Stacey
The Funnel Cake IPA presented by Sun King is only available at the Indiana State Fair.

If beer isn't your thing, you can purchase wine or other spirits at The Taproom in the Grand Hall across from the Indiana Farmers Coliseum.

But of course, if you're drinking - don't drive! You'll use a rideshare service to be dropped off and picked up safely across from Gate 3.

Learn more about the other 'Taste of the Fair' options here.