A Marine veteran woke up after an 8-year-long coma. Now, he's locked inside his own body

After suffering a brain aneurysm, Jacob Creasman spent 8 years in a coma before he woke up. He regained his awareness but is now fighting for a way to speak. 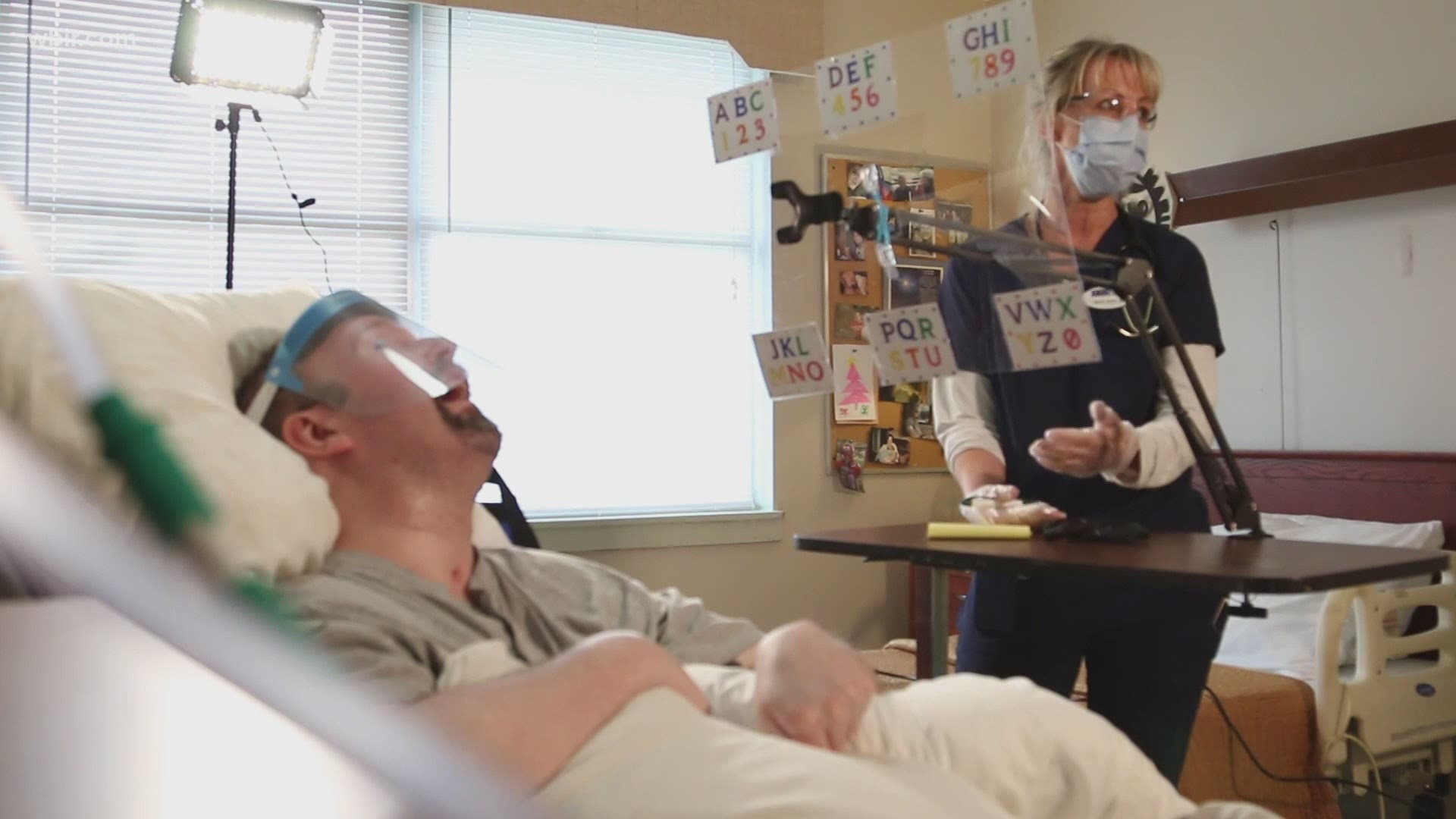 ETOWAH, Tenn. — An Etowah man is on a journey to regain his voice and free himself from an unlikely prison: his own body.

Jacob Creasman is a Marine veteran. In his early adulthood, he was an active and very social person. He was a huge Georgia Bulldog fan, living life to the fullest and making those around him smile.

However, in a single moment, his life changed forever nine years ago. He suffered a sudden and severe brain aneurysm in 2012 that sent him into a long coma.

In the years that passed, his parents never gave up on him, believing that one day he would wake up. In 2020 -- his eyes finally reopened. He was awake in a new world, but he could not tell anyone or move a muscle.

Jacob had awoken to discover he was locked inside his own body.

“When someone is locked inside themselves -- they cannot communicate in any way when they come out of a coma,” his respiratory therapist Tricia Limpus said.

Jacob suffers from something known as Locked-In Syndrome. He’s awake and fully aware of his surroundings, but he's completely paralyzed. He can’t move anything except his eyes and other small portions of his body.

He could not speak, so it was his eyes that had to tell the world that Jacob had regained his awareness. He began to use his eyes to track the staff at the community where he lives in January 2020, and soon they "heard" him loud and clear.

Because Jacob's eyes are the only part of his body he can reliably control, they are his only avenue of communicating with others.

His caretakers first tried setting up flip cards from A to Z to allow him to have a conversation with others. It was a slow and arduous method of communicating.

“Originally we would go through the whole alphabet and he would move his lip for the right letter, and then we would go to the next letter -- and in 40 minutes we would probably get a paragraph,” Limpus said.

However, his eyes were able to tell stories. That’s when Limpus stepped in to create an eye-gaze board with letters and numbers he could 'point' to simply by looking at it, giving him a new outlook on life.

“This sped it up probably 80% faster, and so now I mean we can do three pages worth of conversation instead of just a paragraph,” said Limpus.

Limpus started working with Jacob just last May, but they've developed a deep connection through their faith.

“I was very emotional because I just couldn’t believe the situation he was in, and he just touched my heart,” said Limpus

Both of Jacob's parents are severely ill, leaving no one to speak for him. That was until Limpus took it upon herself to fill that void and be his voice.

“If I don’t, I don’t know who else will right now. It’s critical because someone has to. He can’t do it himself,” Limpus said.

Now she fights alongside Jacob in hopes of getting him the technology he desperately needs to communicate with the world and regain the social portion of his life.

“Being able to communicate would allow him to do that. It would just open up a whole new world for him where he can express his thoughts and be a little more in control of his life” Limpus said.

A device, known as the Eyegaze Edge, a computer with a tracking camera able to formulate his thoughts by following his eyes, would be able to do just that. At around $16,000 with no insurance or way to work, though, talk isn't cheap for Jacob.

“It would be life-changing for him to be able to have some control of his life because right now he has no control,” Limpus said.

For now, Limpus is just glad to be able to communicate with Jacob in some way.

“Any day where I’m in a bad mood and I walk in the room this is the smile I get, and he’s so happy to see me and so I’m very thankful for him,” she said.

To help Jacob with the life-changing technology he needs to regain his voice and to learn more, you can visit his Help Hope Live campaign at the following link: helphopelive.org/campaign/18181