Branding 2020 a "dumpster fire," an Ohio photographer found a creative, lighthearted and charitable way to usher in 2021. 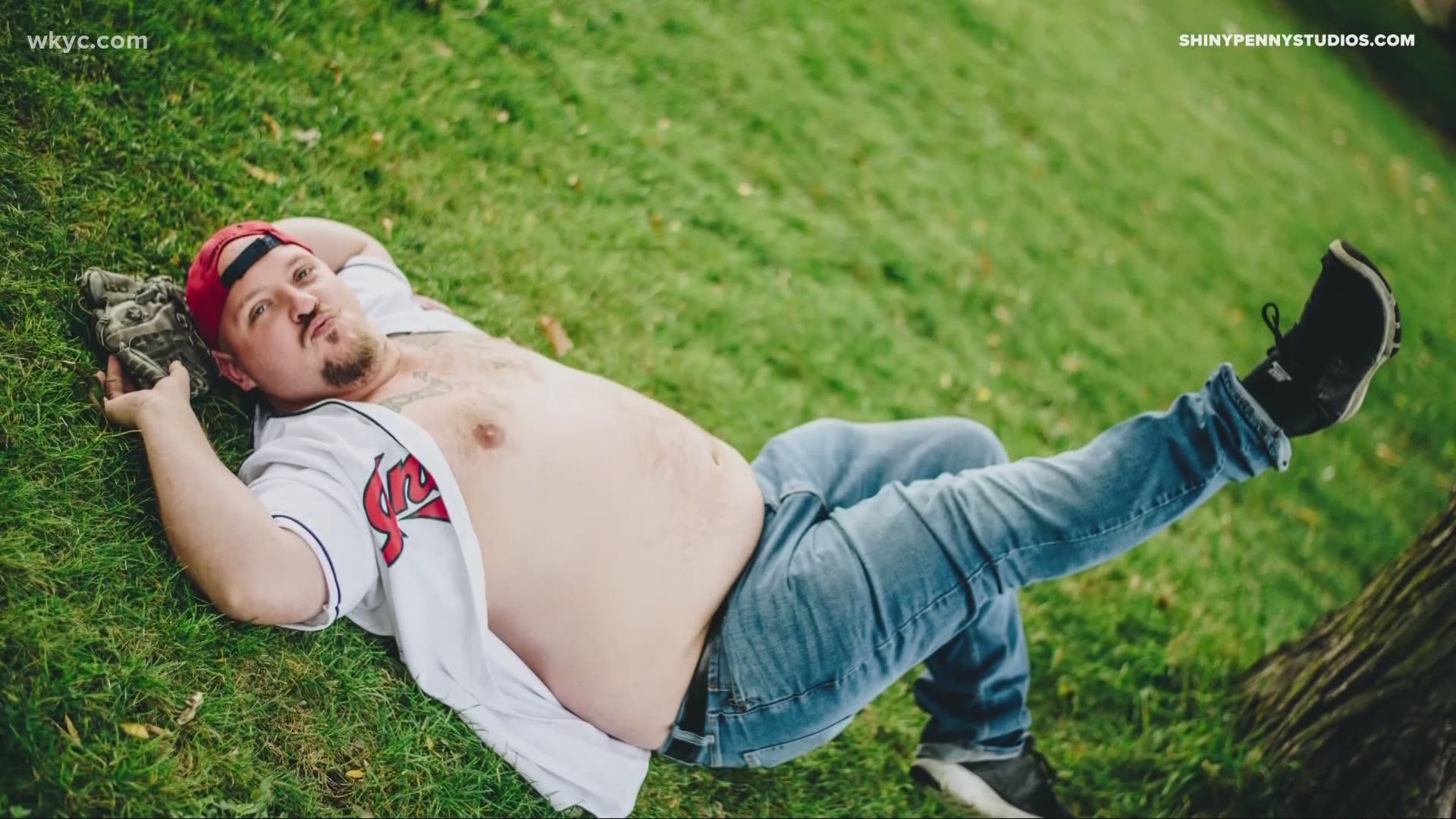 AVON, Ohio — It’s only October but many of us are ready to say goodbye to 2020 now. Count photographer Keli Schimelpfenig among those ready to kick this year, which she likens to a “dumpster fire,” to the curb.

But the owner of Shiny Penny Studios is still in the midst of a project that will celebrate the new year in style.  Its mission: to benefit a good cause and do its part in bringing Midwest sexy back.

The idea, like most great ones, came by accident. On a Zoom call with girlfriends, the group launched into a discussion of online dating and the profile pictures some people choose.

“We started discussing how there was such a proliferation of horrible, selfie photos on dating websites. Especially the men. They had no idea how to take a decent photo of themselves,” Schimelpfenig said.

So she hatched a plan, offering proper head shots to a group of men, that also allowed them to show off their fun personalities. Theater friend Luke Scattergood was among the first to respond.

“I messaged Keli right away and said, ‘Oh, sign me up, whatever it is,’” Scattergood said.

The group hit up Maria’s Field of Hope in Avon where photographer Schimelpfenig snapped away.  Profile pics first and then she encouraged the men to strike a pose, letting their sexy come through.

They did not disappoint.

Credit: Shiny Penny Studios
Luke Scattergood, a theater friend of Keli's, was among the first to say "yes" to the project. "We haven't had a lot of fun lately. There hasn't been a lot of time to get out and just do things and enjoy yourself. And that's what this was really all about."

“One of the guys popped up behind a couple of sunflowers. Another was perched on a ladder, like he was at the bough of a ship and it was the most crazy, goofy, amazing stuff,” Schimelpfenig said.

After looking at the photos, of these men in all shapes and sizes celebrating their bodies, Keli had another idea: a calendar of everyday men, average joes, and their proud “dad bods.”

“I talked to some of my friends and was like, ‘I am thinking of doing a calendar. Is that old-fashioned?’ And they said, ‘No!’ Because people are so looking forward to 2021,” she said.

More shoots followed at Wendy Park, in the spirit of what Schimelpfenig calls ‘dudoir’ photography.

“There may be a hint of goofiness about some of the photos that you do, but then there’s a whole section of photos that really represent that man. And it may be something that his wife or girlfriend enjoys. And I think that’s’ probably why those wives and girlfriends were sending their significant others saying, ‘sure go run around a sunflower field and be crazy’,” Schimelpfenig explained.

At the heart of the project is also a desire to help the community in difficult times. Profits will benefit Meals on Wheels of Northeast Ohio.

“I knew I wanted to do something involving hunger because that’s such a critical need right now,” she said.

Also in need, something to lift spirits, and bring a laugh during a year that has been less than kind.

Credit: Julie Kline
Dad Bods of Cleveland 2021 is a celebration of men, "average Joe's" in all shapes and sizes.

“The responses I got from people just saying, ‘Oh, my gosh, you have no idea how much that brightened my day to see that.’ Or, ‘oh my gosh, I wasn’t expecting that. But it made me smile!’ I just think that’s the spirit of the whole thing. Just put a smile on somebody’s face, celebrate people no matter what their shape or size or skin color is. Because it’s important. It’s important to be inclusive and to just spread a little smile,” Scattergood said.

The calendar isn’t quite done yet. Schimelpfenig is holding one more open call. It’s being held at Tyler Field within the Rocky River Reservation, on October 24th at 2 p.m.

However, pre-sale orders are being taken now. “Dad Bods of Cleveland 2021: A Year of Midwest Sexy” – a calendar unlike any other.

“I’m buying some to give out as gifts. So, if you are on my Christmas list watch out, cause you might get one,” Scattergood said.

Click here, to order a copy of "Dad Bods of Cleveland 2021: A Year of Midwest Sexy."

RELATED: Avon Lake teacher gets A+ for creativity as gym class goes virtual