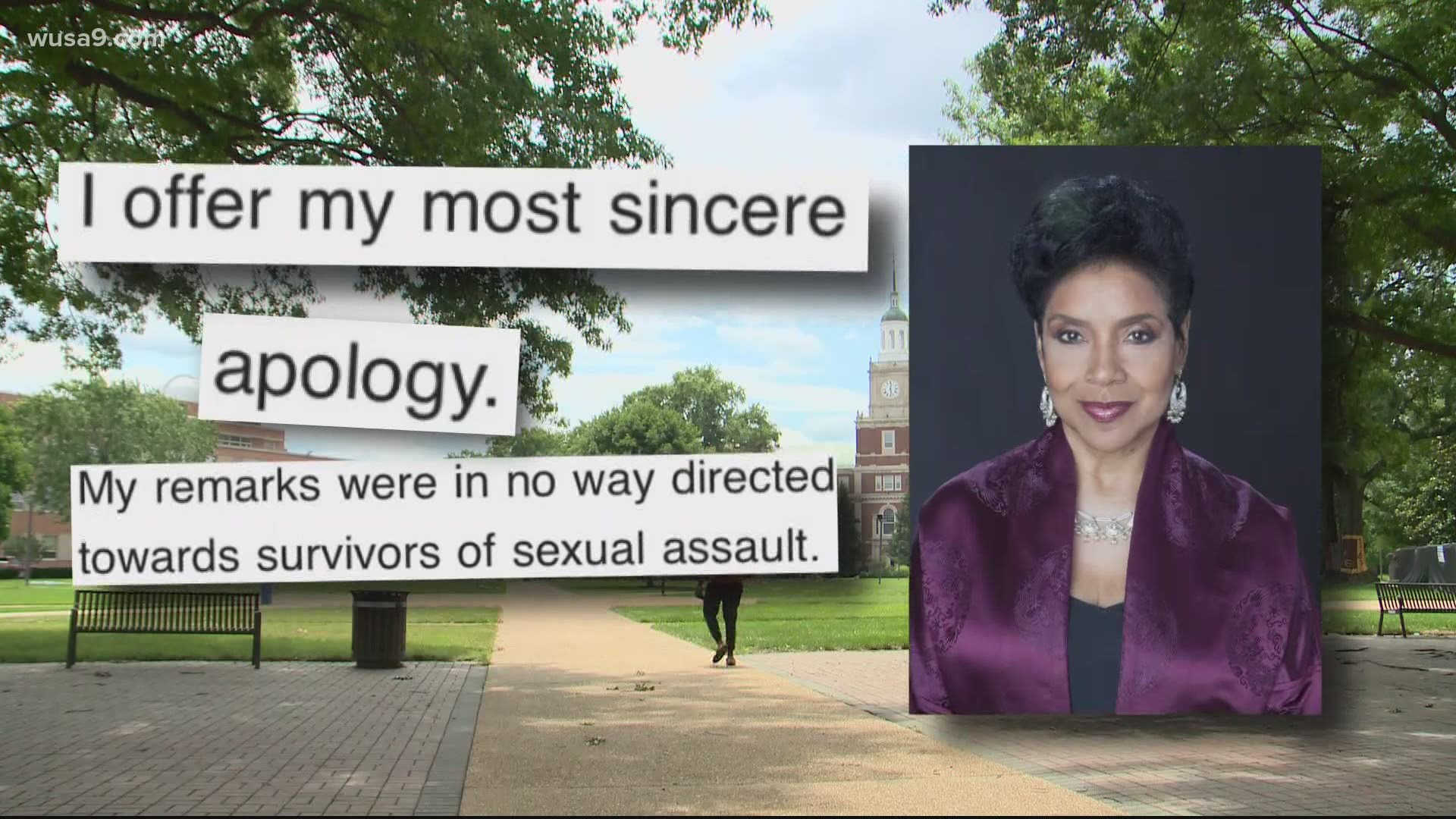 WASHINGTON — After her controversial tweet celebrating the release of Bill Cosby from prison, actor and new Howard University dean Phylicia Rashad released an apology letter to students and parents.

"I tweeted a statement that caused so much hurt in so many people – both broadly and inside the Howard community," Rashad wrote in the emailed letter obtained by WUSA9. "I offer my most sincere apology. I have since removed that upsetting tweet. I am sorry. I intend to earn your trust and your forgiveness."

Rashad immediately came under fire after supporting Cosby soon after a judge overturned his 2018 conviction in a tweet that said, "FINALLY!!!! A terrible wrong is being righted- a miscarriage of justice is corrected!"

Rashad has taken down the tweet and vowed to become a better supporter.

"Over the next few weeks, I plan to engage in active listening and participate in trainings to not only reinforce University protocol and conduct, but also to learn how I can become a stronger ally to sexual assault survivors and everyone who has suffered at the hands of an abuser," the letter read.

Cosby walked away a free man after the courts ruled the 83-year-old was denied a fair trial when he was found guilty of drugging and sexually assaulting Andrea Constand in 2004.

The former comedian issued a statement Monday in response to Rashad's tweet:

“Howard University you must support one's Freedom of Speech (Ms. Rashad), which is taught or suppose to be taught every day at that renowned law school, which resides on your campus," the statement read. "This mainstream media has become the Insurrectionists, who stormed the Capitol. Those same Media Insurrectionists are trying to demolish the Constitution of these United State of America on this Independence Day. NO TECHNICALITY -- IT'S A VIOLATION OF ONE'S RIGHTS & WE THE PEOPLE STAND IN SUPPORT OF MS. PHYLICIA RASHAD.”

Many current and former Howard University students and sexual assault survivors said her comment is not only insensitive but creates a bad precedence for people who experience sexual violence. Howard University also released a statement denouncing her tweet and called it insensitive.

Following the backlash, Rashad followed up with another tweet the same day that said, "I fully support survivors of sexual assault coming forward. My post was in no way intended to be insensitive to their truth. Personally, I know from friends and family that such abuse has lifelong residual effects. My heartfelt wish is for healing."

In her apology letter, Rashad emphasized her remarks were not directed towards sexual assault survivors and "vehemently oppose sexual violence."

"Unfortunately, you can't stand with survivors of sexual assault and Bill Cosby on this one, you just can't," attorney Linda Correia told WUSA9.

Correia of Correia & Puth represented six Howard University students known as Jane Does in a 2017 lawsuit that alleged school officials poorly responded to cases of sexual assault. The lawsuit was settled last year.

"The rippling effects that are insensitive to survivors of sexual assault are well known," Correia added. "These kinds of statements have a chilling effect on people who experienced sexual assault."

The letter and follow-up tweet weren't enough for former students such as Nylah Burton, who had her own experience of sexual assault while she was attending Howard University a few years ago.

"I was really angry but I wasn't surprised because that's just how people are," Burton said.

Burton helped start the Black Survivors Healing Fund in June 2020 after she kept hearing multiple reports from Howard students about their own experiences of sexual harassment and violence while attending the school on social media.

She wanted to raise money to help fund current and former students with anything that can help them heal.

The donation page took off when it was first released last year but has slowed down. However, the tweet from Rashad last week gave the fund a reinvigorated boost by motivating close to 100 people in four days to make a donation.

Her efforts are currently supporting 20 survivors but she has more than 20 on the waitlist which had to be shut off because the funds prior to the tweet were slowing down. The goal is to raise $50,000. As of Monday afternoon, the fund raised $44,200.

RELATED: What's next now that Bill Cosby has been released from prison?