Review | 5 things to know about HBO Max's 'Locked Down'

Anne Hathaway and Chiwetel Ejiofor arguing for two hours in a London house during a pandemic. That's the gist of HBO Max's new original film. Here's my take.

ST. LOUIS — The pandemic may have taken away plenty from Hollywood, including the ability to get a film or television series shot without delay or hiccups, as well as profit and promise. But one of the silver linings of something big happening to the world is that the make-believe folks have a new toy to play with. Since COVID-19 is still making its presence known, directors and writers are going to find their own art in the struggle.

Enter Doug Liman's "Locked Down," starring Anne Hathaway and Chiwetel Ejjofor as a couple at the end of a passionate yet grueling marriage, who are stuck inside their London home for two weeks. Imagine wanting to escape something so bad that you secretly buy your husband's beloved motorcycle (that he's selling to sorta show you he can change), just to give it back to him as a parting gift, so he won't be left with nothing. That's where Linda (Hathaway) and Paxton (Ejiofor) are as Liman's film opens up.

Here are five things to know about this flick before you decide to click play.

The majority of the running time is spent with these two undecided souls in one setting, which gives the film the aesthetic of a play. This sets up a situation where an actor can just go to the batting cages and riff on the dialogue like Shakespeare, and Ejiofor takes full advantage of it. Paxton has a blue collar job as a cargo transporter, but he's infatuated with poetry, taking to the streets to read his neighbors-whether they like it or not-a famous poem on certain occasions when the moon needs to be howled at. Linda is highly successful yet miserable, having to fire four longtime co-workers via Zoom while thinking about a bottle of wine to smash. So get ready for extended monologues over and over, which can be fun with the right actors. Luckily, Liman has a couple gems.

The two leads are the reason to watch

They carry the film through its slower and more ridiculous parts. Steven Knight's script may not be his most ambitious, but it's very talky. Actors love that, especially talented ones like Hathaway and Ejiofor. They handle the verbal volleys like pros and use it as fuel to give a true performance. I had no problem telling the difference between actor and character here, and that means a movie gets past the finish line for watchability. Some performers need a lot of props, set action, and movement to produce something worth talking about; these two just kick to old school and dig into why Linda and Paxton are at such a narrow crossroads.

Toilet paper romantics will laugh out loud early on

Credit to Ejiofor for really knowing how to spring a reaction to a man walking out of a grocery store with enough rolls to wipe every rear-end in England. It's not fit to print here, but that just gives you one more reason to watch the film. It will be a line that you repeat to yourself every time someone leaves Target with two extra packages of toiletry.

(Hint: It's in the trailer)

The heist subplot wasn't needed, but it gets them out of the house!

One of the hooks of the plot is that in an act of desperation, professionally and relationship-wise, Linda and Paxton decide to attempt a diamond heist at her work. As one of her major department stores are being emptied, a piece of jewelry is being put into her care for transport. While it gives the film some energy and allows the dialogue to take a small nap, I didn't find it necessary. It's where the problems of the film start to mount up, taking the focus away from the central plot (two people holding divorce court in their living room for two weeks) to serve up Liman's thriller tendencies. What was very fresh in "Mr. and Mrs. Smith" seems tiring here, like Knight tried to make "Ocean's 8" look better or something.

Pandemic drama could be comfortably relatable, or uncomfortably sad but true to audiences

It'll be impossible to not see a small resemblance of your own life in Linda and Paxton's struggles. Couples fighting over their relationship now that the outside world has been shut off, like a distraction going dark all of a sudden. You have to think at some point in 2020, more than a few lovers, longtime or just new, have to figure out where they are going, and more importantly, where they have been and why? That aspect of "Locked Down" was very well done, adding some levity to a situation that doesn't exactly get better with each month. Being able to detach myself from their situation, while getting some entertaining mileage out of it, was a guilty pleasure-type escape. But some won't feel that way if it hits too close to home.

Bottom Line: If you like the two leads and stage-play type dialogue wars, this will be an intriguing experience. A change of pace, and hopefully just the start of HBO Max's original offerings. This would make a great doubleheader with Steven Soderbergh's "Let Them All Talk," another highly chatty acting showcase. Otherwise, restart "The Sopranos" binge. 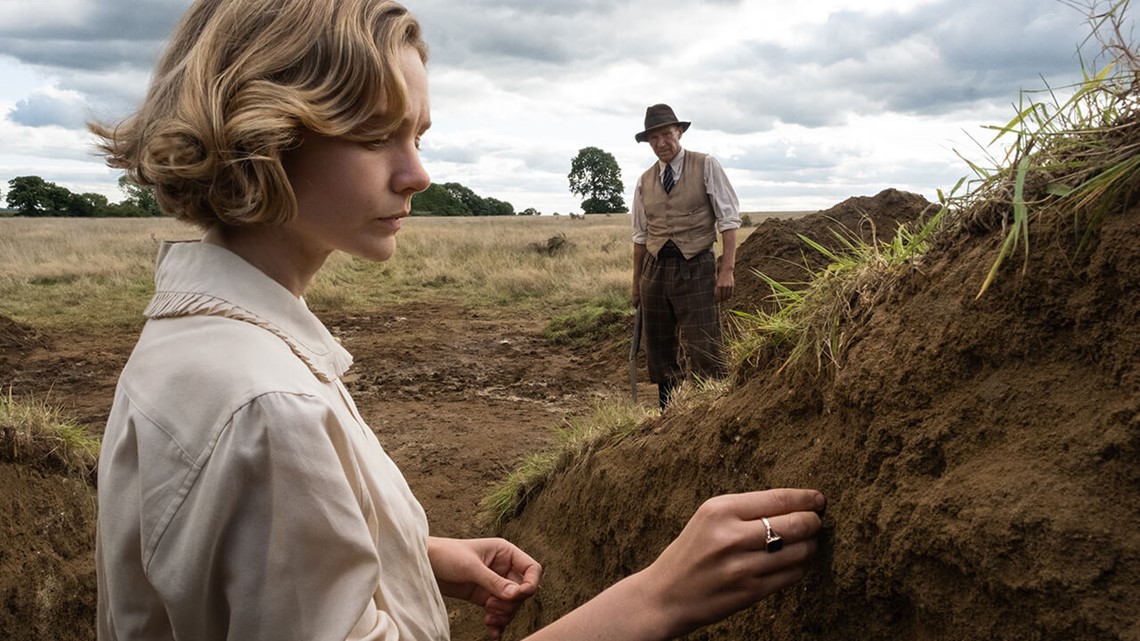 'The Dig' Review | Simon Stone's tale about discovery provokes thought and great performances
You won't find a better leading duo than Ralph Fiennes and Carey Mulligan, and Moira Buffini's script is about much more than old wooden ships. ST. LOUIS - Discovery and history share an odd relationship. Two vital things that keep tabs on each other's existence and impact start to mean something more when you attach them to a lifetime.